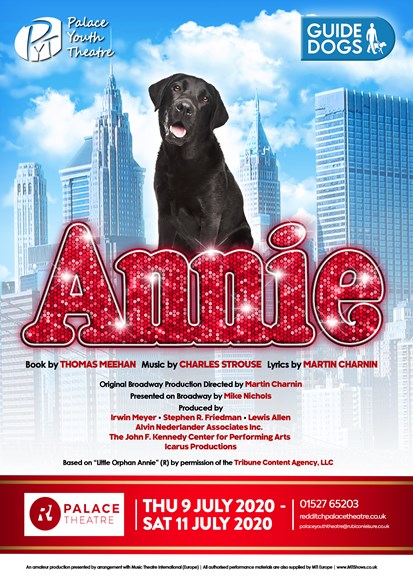 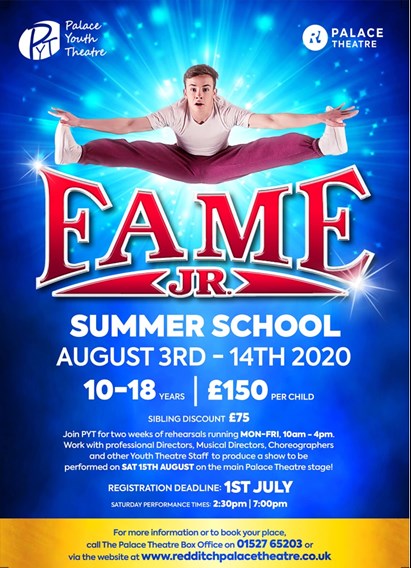 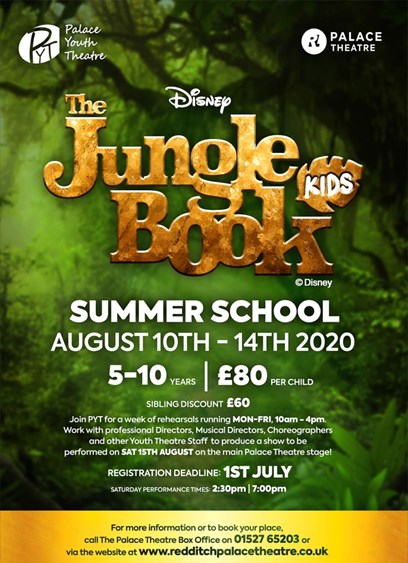 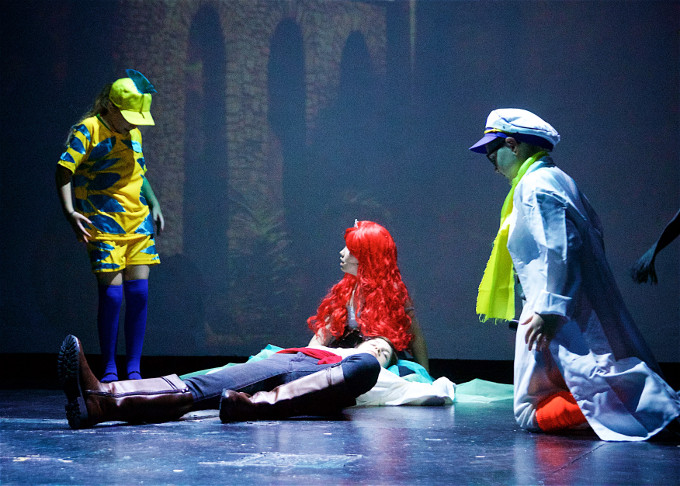 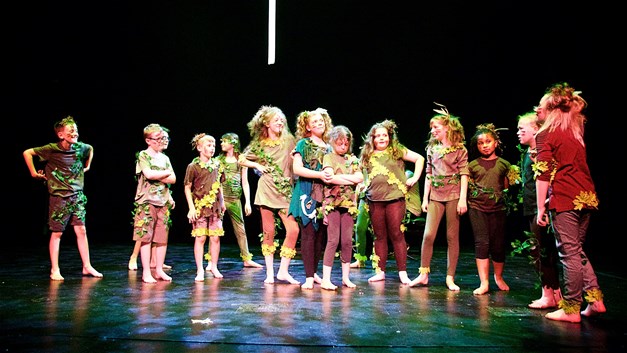 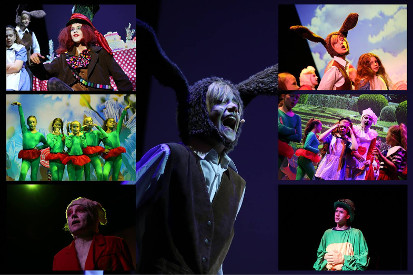 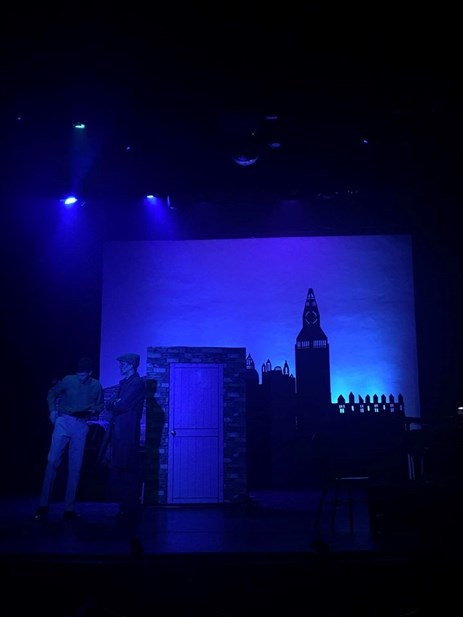 Beauty and the Beast Jr

PYT took on the mammoth task of casting, staging and performing Sweeney Todd all within a two week period over summer 2016.  We were astounded by the whole cast and the amount they achieved within the two weeks, approaching the show with amazing maturity and enthusiasm.

" Absolutely amazing performances by all,, so good and entertaining." Maria Smith

"Well done to all the cast & crew in Sweeney Todd, my daughter & I watched it last night it was fabulous. It was hard to believe you put it all together in 2 weeks, you should be incredibly proud of yourselves"  Samantha Clement

"What a great show Sweeney Todd is, you have done a great job and the whole cast were amazing! Can't believe you achieved that in just 2 weeks, well done" Nicky Cullen 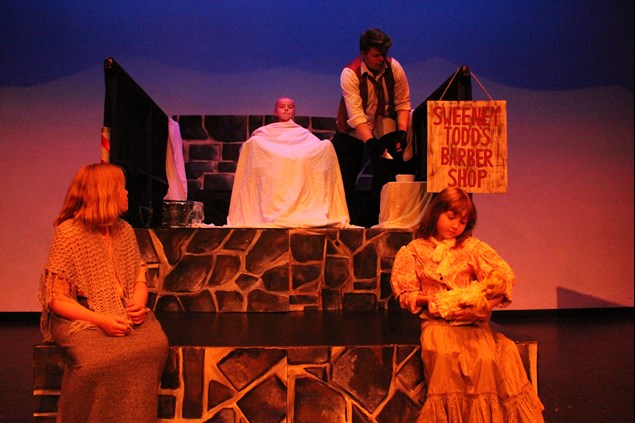 His Dark Materials (Part 1) tells a magical tale of a young girl, Lyra and her mysterious Uncle, Lord Asriel and is based on the same novels as the film ‘The Golden Compass’

The story begins in Lyra’s Oxford – an Oxford very like our own, but with strange differences like each person’s soul taking the form of an animal companion or ‘Daemon’.

When Lyra overhears her Uncle, Lord Asriel, arguing with the religious authorities about mysterious “dust”, she embarks on an incredible journey to the Arctic to try and discover the truth. She meets the dangerously enticing Mrs Coulter and learns the secrets of the truth-telling Alethiometer. Along the way she encounters fantastical creatures in parallel worlds – armoured bears, flying witches and child-catching Gobblers.

In an eerie deserted city, Lyra meets a young boy, Will, who is on the run. Her fate is strangely linked to his, and together they must find the most powerful weapon of all – a magical knife that can take them to parallel worlds. 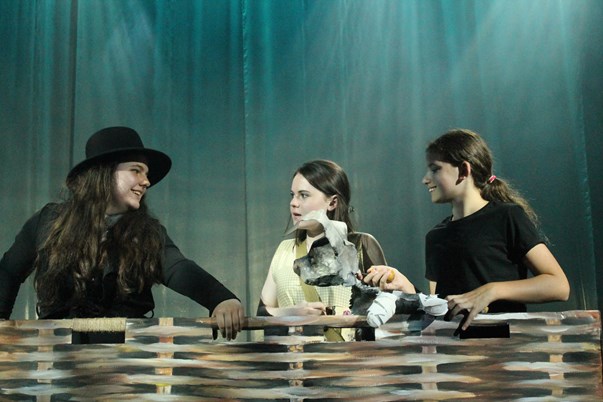 Adapted from the stories by Rudyard Kipling. Mowgli the “man-cub”, lost in the jungle, is rescued from the clutches of the fearsome tiger – Shere Khan, by Baloo the bear and Bagheera the Black Panther. Brought up with a family of wolf-cubs, the time eventually comes for Mowgli to return to the world of Man. But Mowgli is not finished with the jungle, for one day he returns to settle the score with Shere Khan… 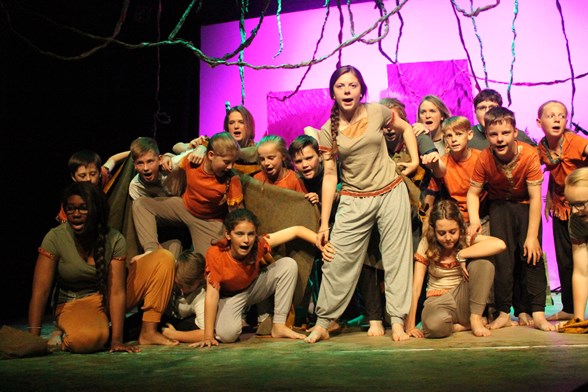 The Truth Behind the Tales

All fiction has been banned.  It seems that fairy tales are a thing of the past, buried beneath the ground or burned to ash.

But what happens when a little boy discovers the torn out pages of a book full of our favourite fairy tales?  Can the imaginations of children bring them back to life?

An improvised performance by the On Stage group 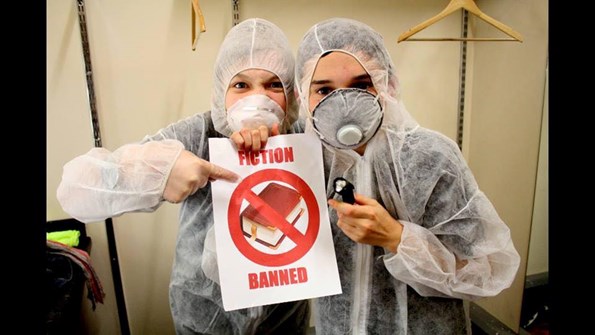 Alice In Wonderland and Alice Through the Looking Glass

“Well done to the whole cast in Alice in wonderland you were outstanding tonight your hard work really was worth it and yes it was for all ages because I loved it especially the make up and costumes for Jordan Laight as the Cheshire Cat, Alex Cottom the red queen, Declan Mosson as the mad hater and Katie Booth as the white rabbit. I still thought everyone’s acting was great in the show today well done guys.” 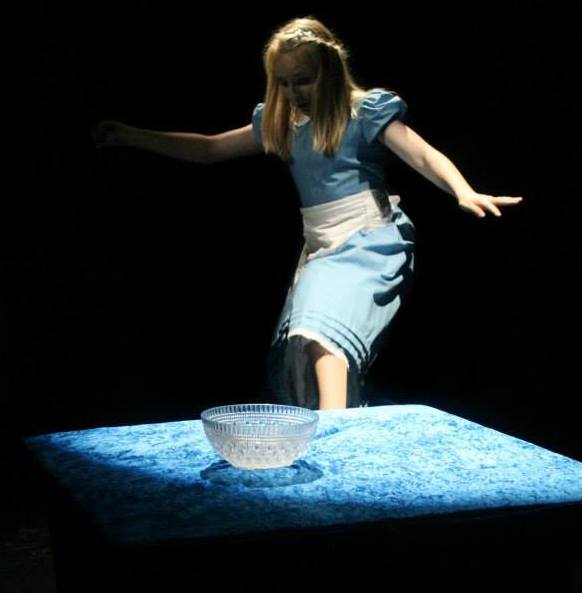 Take a voyage with Aim High Theatre on the merry-go-round of the senses. Stop along the way to taste the circus of imagination and the backyard of discovery. Destination unknown.

Aim High are a group of young performers with learning disabilities.

Following the success of their debut performance ‘Elevator’, Oddssey 2  is the group’s second devised performance.

WHEN Peter Brook filmed Lord of the Flies in 1961, he took his little bevy of mostly amateur actors to the Caribbean: Puerto Rico, and the small island of Vieques, off the Eastern Coast. The result: a masterpiece of black-and-white filming.

The youngsters of Redditch’s Palace Youth Theatre – and the numbers game required that many boys’ roles here were taken, often superbly well, by girls – had no such luxury with which to conjure up the remote paradise on which their aeroplane has crashed, wiping out all adults.

Yet in this often first-rate production, director Liz Sifford demonstrated with her promising cast time and again what can be achieved with scant or simple resources.

The restrained set (Alan Sifford) spoke mountains. A vast shattered cockpit, eerie, blackened, hung over rear stage left like an evil eye: the Beast, you felt, could see all, hear all, sense all. As an omen of what is to come in the story, as barbarism conquers humanity, and Christian values yield to idolatry and unbridled evil, it could scarcely have been bettered.

On the other side, a rock – the rock. I lost count of how many imaginative blockings Sifford managed with her actors – two simple levels, used to astonishing effect: a benign gathering place, but increasingly a marshalling yard for monstrosity. When the hunters gather, you sense the moral order about to be inverted.

A gentle alliance between two boys – Ralph (an increasingly assured Declan Mosson, middle class decency to the core; his meditative speech over the conch following Piggy’s demise, and breathless soliloquy while pursued, were classics) and an asthmatic ‘Piggy’ (the intelligent, gently gawky Ben Adams – the ‘Me auntie says’ type) – they alone, in a nice touch, have pure white shirts at the start – offers a safe haven for lost and orphaned younger children, before being assailed and riven by the sneering, amoral head chorister Jack (the pretty terrific Jordan Laight), a tyrant in the making.

All are practical or, in the villains’ case, moral victims – of ambition, bullying and bluster, of domineering and cruelty, and ultimately out-and-out violence, which consumes one boy (Simon – Katie Booth), wipes out a second (Piggy), nearly destroys a third (Ralph) and sullies all but a remnant of innocents whose values remain unaltered.

The quality of performances here was remarkable, and extended throughout the cast. As an aside, I particularly liked Tazz Palmer’s Maurice – the problem member, a thinker, holding back his own Jack-like propensities – and his sidekick (I think Eve Parker’s Bill). These were performances that held the eye and ear every time they emerged. Maurice’s soliloquy on Piggy’s death was one of the best – and best spoken – things of the evening.

The small idiosyncratic one – I think Molly Seaborn’s Percival? – the child who ‘saw the beast’ – created poignancy and atmosphere every time he uttered. He in fact sees things as they are: presciently, ‘Is it war, then?’

Alex Cottom’s initially unimposing but increasingly warmongering Roger went on to prove a ghastly lesson in Martin Bormann-like loyalty to the leader. Mein Führer, right or wrong; Roger became (here, as in the book) almost more ruthless and bloodlusting than Jack: quite some achievement, given Laight’s brutal portrait of grisly implacability.

However one stood out from the others: out of Simon, Katie Booth built an extraordinary, troubled boy. Mosson’s Ralph and Adams’ Piggy are differentiated by their basic, old-fashioned decency (the others in their group have not yet aged sufficiently); but Simon is ‘other’: he is a mystery, as if of, or in touch with, another world.

Booth captured all of this, and more: in her you could sense, see even, the magic of his intuition, perceptive way beyond his years; his moral compass (he is, indeed, the stranded party’s ‘soul’); and worst of all, his apparent death wish.

The first hunt for the pig was superbly enacted; but almost already, we were getting onstage the signs that the ‘real’ pig would be Simon. This was high quality directing, anticipatory, on the pulse; and with it went hugely poignant, impressive acting.

Booth’s Simon also squeals – cries – like a pig. It was an unnerving and harrowing vocal effect, and with the boy’s fabulous, almost yelping soliloquy – albeit not all of which you could quite catch the words of – only added to the growing evidence that this was a remarkable, profoundly empathetic performance.

There were odd touches from Sam n’ Eric I liked, just here and there from Jordan Searle’s Eric, the gawkier of the two – tied, as it were, at the waist. Jack (the only choir aspect I didn’t like was the rather weedy robes the new arrivals initially turned up in) never gave an inch: Laight’s stance, and moves, were never less than forceful, her capacity for barefaced aggression impressive (‘Chiefs don’t have to say; chiefs decide’); she handled dialectic like a master disputer.

Her words some times lacked the penetrating clarity of her sharper corrupt young accomplices, but the verbal battle with a rebellious (and not yet committed) Maurice was terrific on both sides; and Jack’s Houdini-like response to the challenge ‘What do you want to do?’: ‘I want to dance, I want to feast’ sounded a pretty attractive proposition. Simon’s death is, amongst other things, Jack’s turning point. From then on, he is pure evil.

The moves were strikingly well mapped, and I increasingly liked the blocking – on and off the rock: some repositionings had a powerful impact; several small units were cleverly arranged, not least as the two sides (or sometimes three groupings) became important.

Sifford had drilled her cast to know exactly what they were doing; there was not a single hesitation.  I didn’t quite understand why Ralph seemed somehow caught up in the capture of Simon (although an impressive pink cyclorama impacted well), but I suspect it may be true to the book. 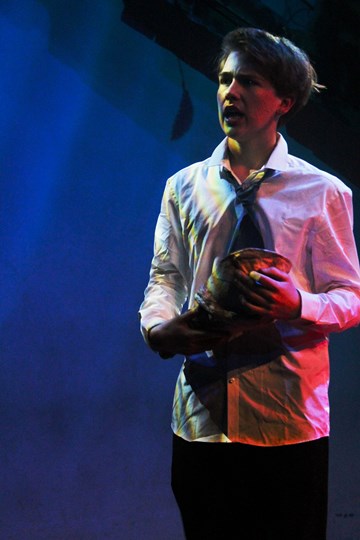 The Tuesday 2 group presented their improvised performance based on the stories from 1001 Arabian Nights in the Room Upstairs.  They spent the last two terms working on this performance, using interesting improvisation and storytelling techniques.

The Wizard of Oz

“Came to see the Wizard of Oz with my cousin from Canada and we thought the performance was excellent. Dorothy had the most beautiful voice. The witch was so entertaining and she sounded so much like the one of the Wizard of Oz. Well done to all those wonderful children that made the show. The lion, Tin man and scarecrow were brilliant.  Thanks for entertaining, you will all go far in life.” 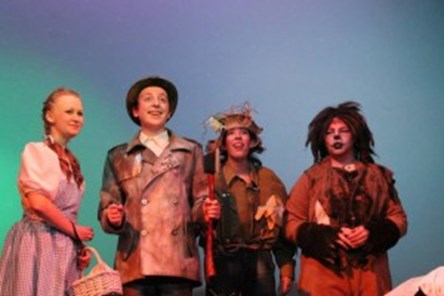 The Lion, The Witch and The Wardrobe

“Thanks to everyone involved with The Lion, the Witch and the Wardrobe for making my last show so great! Can’t believe I’ve had nearly ten years in the Palace Youth Theatre and now its all over, you are all amazing! xxxxxx” Emma Gardner 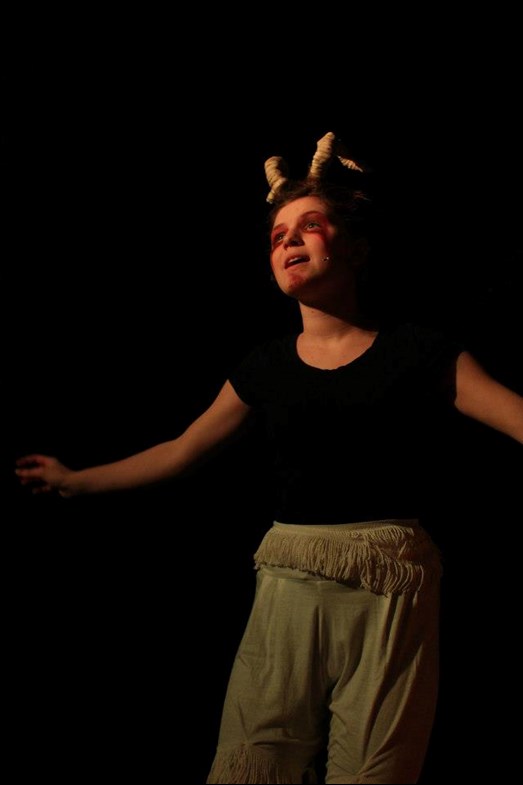 From our What’s On section...